Gordon took the checkered flag under yellow yesterday.  Here in this picture he shows the size of the fish he caught earlier that day or maybe its the size of the check he is going to write to Brooke?  Pretty boring race at Martinsville otherwise.  Not too much bumping and grinding.  Gordon dominated most of the race then Robbie screwed with the car again, Jeff lost position, they put it back, Jeff regained position.  Getting nervous about Junior.  Seems to be running well at all the tracks.  3rd in points isn’t bad going into the Easter break.  See you in California. 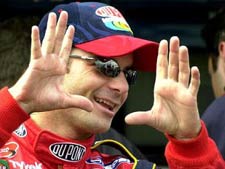 Just installed McAfee’s new SpamKiller.  Its not super great so far.  Seems to have a lot of features but it runs independent of Outlook which is good and bad.  You are supposed to set it up so that it “pre” reads your mail on your POP3 server and then you download it later but that didn’t seem to cool.  I put it MAPI mode which makes it read your Outlook data file locally.  Some of the other programs checked during the POP3 stream read which was very cool.  We will see if it works.  I am trying another program called SpamCatcher on my other server.

What’s the deal with banning blue jeans in schools?  More and more are doing it here.   I wasn’t aware that clothing was responsible for issues.  It was funny because they said it would help alleviate that “who is wearing what” pressure but that seemed weird.  Jeans are jeans, maybe a slight brand thing but who cares.  They said that kids can wear khakis, cargo pants or *designer* pants — designer?  Man.